Greetings and welcome to another episode of Tallavanor’s tales. Last time, our heroes explored the creepy mausoleum, found something they couldn’t explain, but decided to leave it be until they could explain it. Back to the Count! Tallavanor, take over! 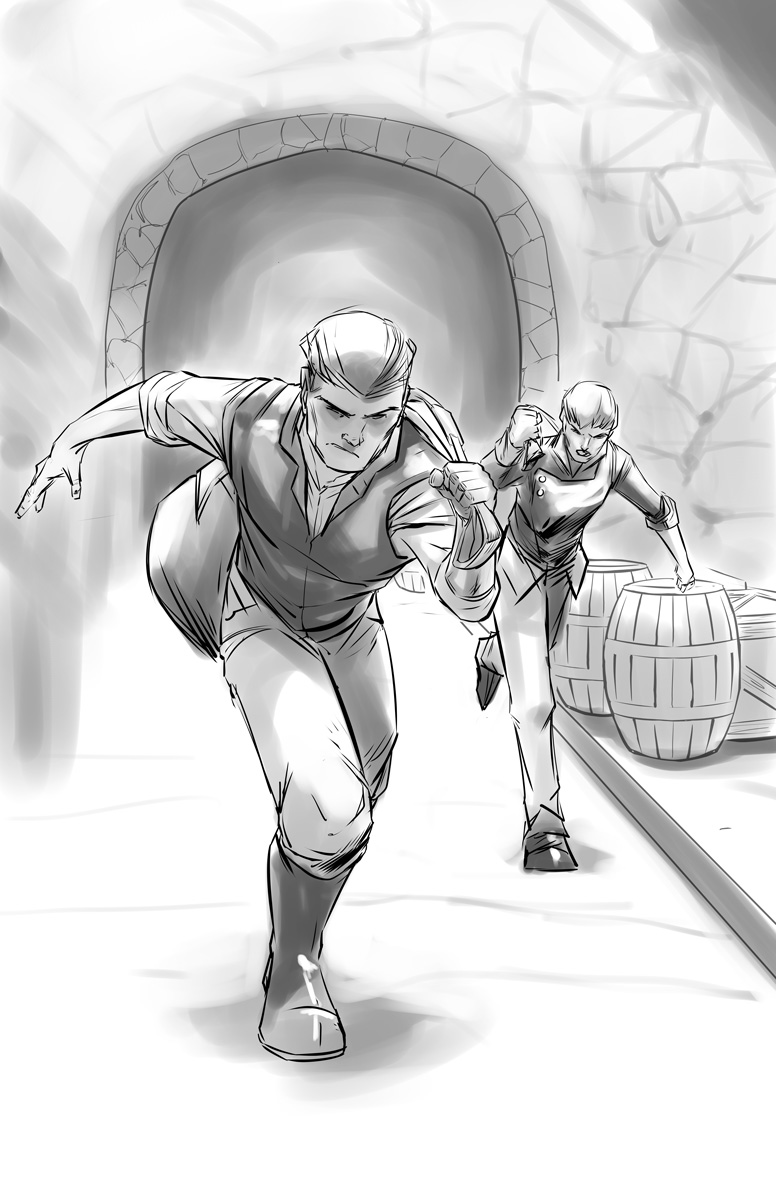 The four of us ran down the road. Leaving the priest behind to tend to his flock, we ran down towards the village. I found the muddy horse tracks from the night before, leading straight from the place we saw the Count’s kidnappers galloping away as we reached the castle. For a while we followed at a fast pace, until Gregario held up a hand.

“Hold up, we got ambushed on this road yesterday. We should probably be a bit more careful.” Nodding, I pointed to the edge of the road. Partially covered in brush, but still solid and raised, I could follow the tracks from there.

So we moved slower now, Gregario trailing behind myself, Claudia, and the mysteriously quiet Alastair. Our guns in our hands, we followed the road. As we descended, the fog banks grew before us. Only once did we stop, a mysterious rustle in the branches causing us all to freeze in worry, but nothing else happened and we continued, a bit more slowly.

The first buildings of the village rose before us out of the fog like islands in a grey ocean. I stared across at the buildings. The once sleepy town was a boil of activity, and my keen eyes spotted guards on the rooftops.

“Down!” I said, motioning to the party. We knelt, then moved quickly into the underbrush. “They’ve got guards on the rooftops.”

“This must be where the count is.” Claudia said.

“So the villagers are in on kidnapping him and trying to kill us?” Alastair chimed in.

“This is a great time for us to go back to Skane,” Gregario said. “We’ve done our job, it’s beyond what we can do. Time to go back to our own lives.”

“Leave with out job undone? I could not return to Tres Abellies without completing the mission. Besides, considering the forces at work here, I’m not so certain we’d make it back to our old lives.” We were in it deep, and the only way out of it is to go through it.

“Let’s skirt the village” Claudia said, gesturing to the woods surrounding the village to the south and west. We moved through the forest, towards the temple. The temple was south of town, but definitely the most secure building in the village, being made of solid stone rather than weathered wood. As we approached, using the tree cover to protect us.

A distant shout and the twang of a crossbow bolt hitting the tree near Alastair’s head was the only warning we had. A bell began to ring in town, and at least a dozen villagers, armed and armored, ran from the village. They formed up in the field between us and the forest.

“We can’t take that many.” Gregario hissed. “Back!” We moved backwards, deeper into the forest. The villagers followed, but spread out, searching for us. Through the tree cover, I could see the acolyte leading the western group from the church. They looked meaner and tougher than the other group. More experience, bodyguards or people with actual military experience perhaps.

After some shouting and arguing, the groups returned to the village, and we were left to ponder our next move. I argued that we should wait them out, especially after we tried to round the village again, and more lookouts appeared from the mist.

“We’ll wait until tonight, then sneak into the church. We’ll have protection from the darkness.” But our plans were for naught. As the sky darkened and dusk came, commotion from the town revealed a half dozen riders and a carriage moving towards the church. We quickly moved to block the road back the Skane, but first we watched as the Count was led from the church in chains, and pushed into the carriage by a larger man. The massive sword strapped across his back made him out to be a different animal than the armed villagers around him.

The party mounted up and rode through town. We raced around the outside perimeter, hoping to chase him down and maybe ambush him as his kidnappers tried to get him to Skane.

But to our surprise, they took him back up towards the castle. An entire day spent running up and down these damn mountains. But what choice did we have? We went back up the mountain. This time, we risked the road. Just before we reached the castle – again – we shuffled off to the right. Three riders formed a cordon at the top of the road. I really hope the priest got his men out. These villagers were no longer the innocent victims of some scheme. They were actively participating in actions against law, and participating in a crime.

We scouted to their right flank. Claudia tried to use mage hand to get their horses to bolt, but their mounts were better trained than we suspected. Gregario threw a dart at one instead, trying to get it to bolt. With all those attempts failing, we were left with no other choices than to try and ambush them. Two crossbow bolts and one dart later, we’d done little more than slightly wound one of the kidnappers. We charged in, I drew my rapier and short sword and lay into them. Alastair firing freezing bolts from his pistol as I lay about with my sword. Gregario brought one of the horses down with another bolt, the beast collapsing atop the screaming rider. One of them tried to ride for the village, but Claudia and I brought him down with a well timed pistol shot and her perfectly timed insults.

Gregario leapt atop the last horse, knocking the rider off and slicing his jaw in twain. The crazed man charged the other three riders, who stood guarding the mausoleum. By the time Claudia, Alastair and I moved to help, he had already killed two of them. Claudia finished the last one by stabbing it in the eye with her dagger.

With the carriage secured outside the mausoleum and the lock and chain discarded on the ground, there was only one place left for the Count, the acolyte, the large man and the carriage driver to be.

We took our positions outside the door. I checked my ammunition and Alastair fiddled with his mechanical creation. Gregario checked his darts and Claudia cleaned her dagger.

We were ready. Back to the crypt.

Be sure to subscribe to the blog to get more Tallavanor’s Tales and other writing, life, and nonsense related things!

One thought on “Tallavanor’s Tales: The Grand Circuit”