Book 4 of the Steam Empire Chronicles is now available for purchase on Amazon, Smashwords, and Barnes & Noble.

Steel Praetorian takes us deeper into the story and the political intrigue in Rome than ever before. Order shatters, resistance endures. Our loyalist friends face new challenges, while our traitorous friends uncover plot-twisting secrets. Cities will fall, Royal Houses will rise, and new technology will come to the forefront  – but for better or worse? (SPOILERS FROM EARLIER BOOKS IN THE BACK BLURB BELOW THE COVER!) 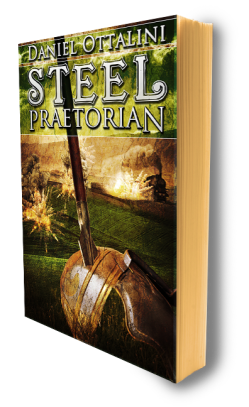 Emperor Hadrian Appius is dead, and the man responsible is his own brother. Unable to prevent the assassination in IRON TRIBUNE, Senatora Octavia and her allies flee Rome, leaving the smoldering capital behind them, determined to fight on against their rebellious countrymen. In the east, rightful heir-to-the-throne Constantine Appius faces disaster at every turn, his forces stretched thin against invading Mongols and rebel Romans alike. With the help of new friends and old, a desperate plan is formed. But will it be enough to save the Empire and the throne in STEEL PRAETORIAN?