Available through Barnes & Noble and Amazon in eBook format.

A 20,000 word novella detailing the rise of Rufius Tiveri Alexandros, Royal Airfleet Captain of the H.M.A.S Scioparto and close friend and confidant of Primus Imperio Constantine Appius. Check out the brief snippet below!

“I think it is always a good thing to practice. One cannot be too prepared.”

Tuderis gave him a look.

“You say that now, but wait till it is happening at four in the morning.” Alexandros had to consider the validity of his point. He opened his mouth to respond as they turned the corner to the engine room. Tuderis forestalled him.

Alexandros took a sniff. Smoke. His eyes widened in alarm.

The two teenagers rushed forward. Tuderis got there first, grabbing the door handle and yanking it open. A backdraft of heat and fire exploded out into the hallway. Alexandros felt himself tossed around and slammed into a metal bulkhead. 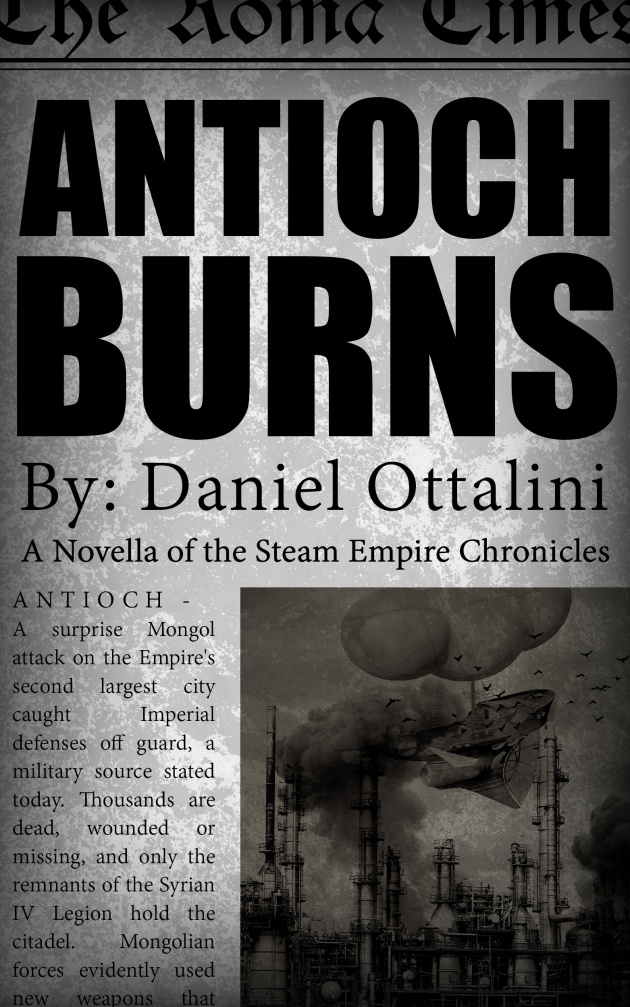 Antioch Burns, a 27,000 word novella set in the world of the Steam Empire Chronicles, is a fast paced, high action story set parallel to book number three in the series, Iron Tribune.

When a scouting expedition goes disastrously wrong, Marius Quinctius Regillus finds himself in a horde of trouble. With the Mongols encircling the grand fortress city of Antioch, Regillus and his men are trapped between a governor’s ambitions and the Mongolian weaponry. With nowhere to turn, can they save the city, or will Antioch Burn?

Discover a new threat to the industrial Imperium of Rome in Antioch Burns, the latest novella in the Steam Empire Chronicles by award-winning author Daniel Ottalini.

Antioch Burns, published by Heart Ally Books, is available in ebook format from Amazon, Barnes & Noble, and through other distributors via Smashwords.

A clash of tradition versus invention drives Daniel Ottalini’s latest work – The Last Gladiator, a prequel novella in the Steam Empire Chronicles.

Lucia Rhodanus Fortem is an endangered species – one of the last graduates of the ludi, gladiator academies renowned throughout the Empire. When the Emperor orders a demonstration of his new mechanical toys – Mechagladiators – he knows just whom to fight. Fans of Gladiator and Pacific Rim alike will enjoy this prequel to the Steam Empire Chronicles – The Last Gladiator.

The Last Gladiator is due to be released May 2, 2020. Available on Kindle, Nook, and for all other e-readers through Smashwords!