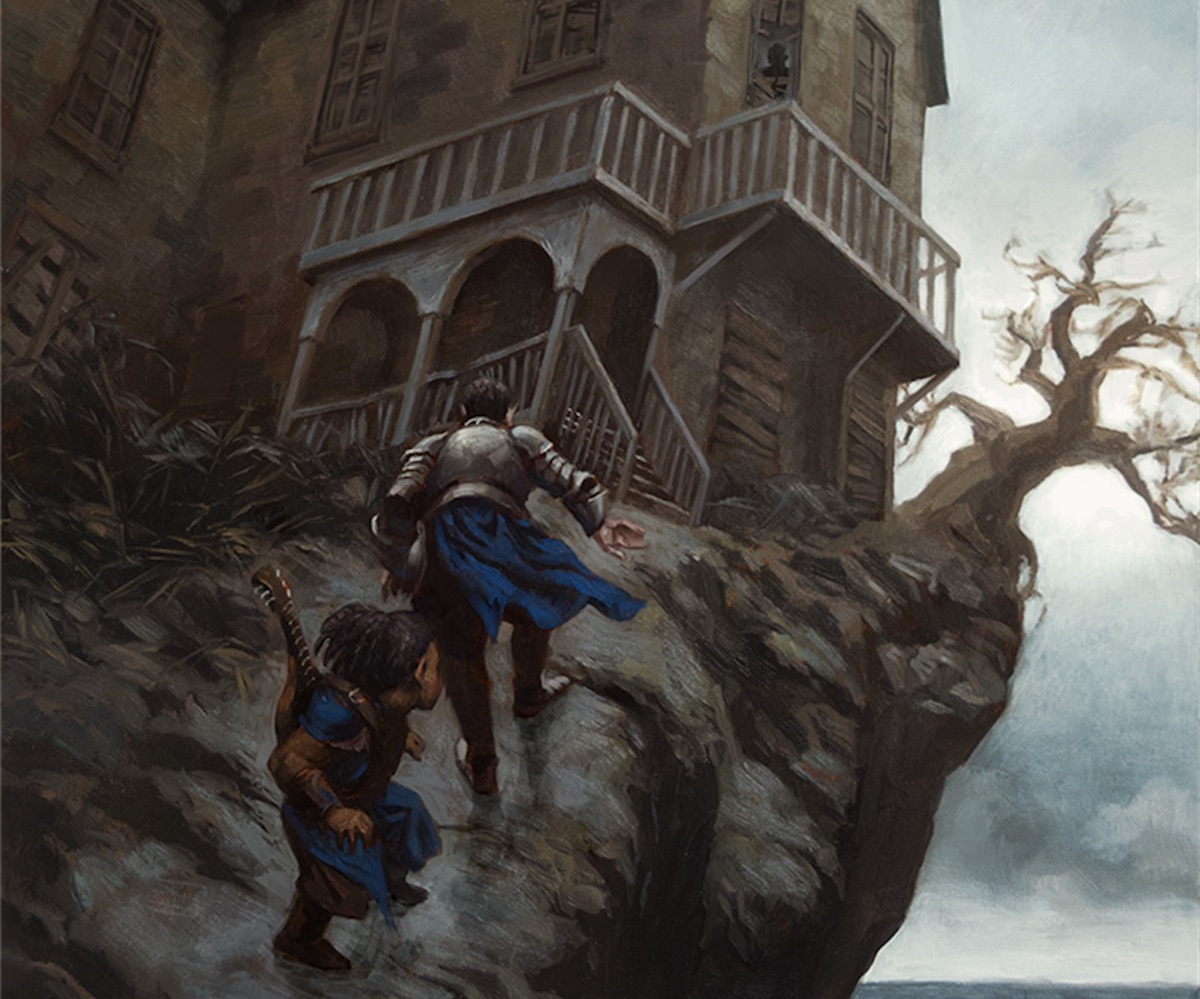 Wham! Aedric kicked down the door and sprinted into the front hall. The Saviors of Saltmarsh followed close behind, fanning out to cover the rogue as he scanned the dusty surrounds.

The abandoned Alchemist’s mansion never knew what was coming. The Saviors of Saltmarsh had taken the job to clear the place at the behest of the Saltmarsh Town Council. Little did they know what they were getting into.

“Hmmm…” No one home. Aedric advanced cautiously to the left, towards one of the open doors.

“That way looks wonderful.” Aros declared, pushing past him and down the hall. A door to the left, one to the right, and one straight ahead. Lucy and Rea explored the library to the left, while Perrin, Zola, and Aros explored the office to the right. Aedric and Pacho covered the hallway. Combined, they broke down a desk and found some spiders, netting them a cool minor healing potion secured within a hidden box in the desk.

“Last room then.” Perrin said, pushing past Pacho and opening the door. A larger room now – empty but for a large fireplace and some debris in the corners. “That’s interesting.” Rea said, noticing some tracks on the floor. “Looks like someone was here before us.”

“Let’s follow them.” Aedric said, placing an arrow on his bow. He stepped forward and then .

“WELCOME, FOOLS, TO YOUR DOOM.”

“By Selune’s name!” Rea squeaked. Lucy, Perrin, and Aros backtracked from the room in terror, and the rest of the party chased them. They regrouped in the foyer, grasping weapons tightly, eyes wide with fright.

“What. Was. That?!” Pacho asked, looking at the three scaredy-cats.

“Perhaps we try the back of the house? That page mentioned something about a back door.” Aedric held up his hand.

“First, I want to see if whatever was in there is still in there. ” He turned and walked back down the hall. The doorway loomed and he stepped through. Shadows crossed the floor from the setting sun. Once again, the voice spoke, shaking the house. ” WELCOME, FOOLS, TO YOUR DOOM.”

“Ah, I see.” Aedric said. He turned and left the room. “It seems like some type of spell or warning. Anyone want to turn back?”

“Not a chance.” Zola said, gripping her staff tightly. “Let’s deal with this place.” Aros gestured towards the back of the building. They crept down the hall, exploring a handful of more rooms, finding a single hidden bag of coin in a chimney (and spiders).

Aedric did not go in the room with the spiders.

Perrin pushed forcefully into the last room in the hallway. “Ah, a kitchen!” He opened the nearest cabinet and started to explore. As his voice echoed around the room, four giant centipedes crawled out from under the cabinets and attacked him. Their pincers drew blood as they clamped onto his arm. Aros ran in and speared one with his trident, the creature tearing in half, with the top part crawling up the weapon while the other was pined to the floor.

Lucy stabbed with her spear, missing as the creatures crawled around. Aedric ducked behind her, shooting at one and just barely managing to snipe one. The arrow lodged within its tough carapace, and the creature turned to attack. Zola spit acid at the one attacking Aros, and it sizzled as it burned, finally falling to the floor.

Perrin smashed another one under a relentless barrage of attacks from his axes. Rea and Pacho moved in, fighting back to back as they faced down the last two. Pacho managed to crush one under his foot, while Rea stabbed and cut at the other one. Aedric turned again and fired his bow in the close confines of the room, striking the soft underbelly of the creature as it rose up to attack. With a shriek, it collapsed backwards.

In a moment, it was all over. Breathing heavily, Aros slapped Zola on the back. “Nice job. We really skewered them there.” He kicked off the bit stuck around his trident.

“Looks like there is a basement.” Pacho said, pushing open the door with his sword. “Shall we go downstairs?”

Like what you read? Get my first novel – Brass Legionnaire – and explore the world of the Steam Empire Chronicles! Only 99 cents at Amazon and Barnes and Noble! (Affiliate Links, FYI). BUT CURRENTLY FREE THROUGH SMASHWORDS FOR THE NEXT WEEK!

Be sure to subscribe to the blog to get more Saviors of Saltmarsh, Tallavanor’s Tales and other writing, life, and nonsense related things!

2 thoughts on “Saviors of Saltmarsh: The Mansion”