As part of keeping me sane here at home, I’m going to expand the D&D writeups I’ve been doing for my Tallavanor’s Tales by doing a separate write up of the Secrets of Saltmarsh Campaign that I’m running for my friends.

What is Redwatch Island?

Only one of the most distant islands in the Lhazaar Archiapelago, home to the Principalities of Lhazaar. Redwatch has only recently risen to prominence, based on two reasons. First, The Prince of Redwatch finally established himself as an actual leader, defeating the Sea Kings Pirate Confederacy and driving them (well, mostly) from the waters around Seaton, his capital.

Second, the newly discovered iron and silver mines in the southern branch of the Redwatch Ridge Mountains give the holder of said mines a lot of power. The island chain is starved for easy-to-access iron ore. Relations with the dwarves of the Mhor Holds have been consistently rocky, and the Prince of Redwatch is well positioned to make himself a lot of money from trade for iron.

With this background, I’ve merged elements of the Ghosts of Saltmarsh adventures and the Eberron campaign setting. While GoSM recommends placing the adventures in Eberron in Q’barra, I prefer an island life as it reduces the number of outside factors and bumps up the use of ships and nautical ideas.

The conflict between the ‘loyalists’ and ‘traditionalists’ in The Ghosts of Saltmarsh book is better replaced with a ‘Unionist’ / ‘Royalist’ versus ‘Separatists / Independence’ Faction. You don’t need to change the characters or their loyalties, just the names.

(They picked the pictures, credit to those artists where possible)

Gorgon grew up in a peaceful Dragonborn community of artisans and farmers in the distant reaches of the continent. Being so rare, these Dragonborn banded together in a small, self-sustaining agrarian community. They also produced fine ceramics, mead and beer, and cheeses for sale more broadly. When Gorgon was barely 20, a roving band of Orcs marauded through her town while she was off to market. Upon her return, she found the last of them concluding their pillaging. It was here that Gorgon discovered her sorcerer’s powers, destroying the last of the stragglers. With only a shred of evidence as to the identity of their leader, Gorgon set off on a quest to track the band. She seeks vengeance for their evil ethnic cleansing mission. Her search has brought her to Redwatch.
AROS MORAGOTH – Triton Paladin 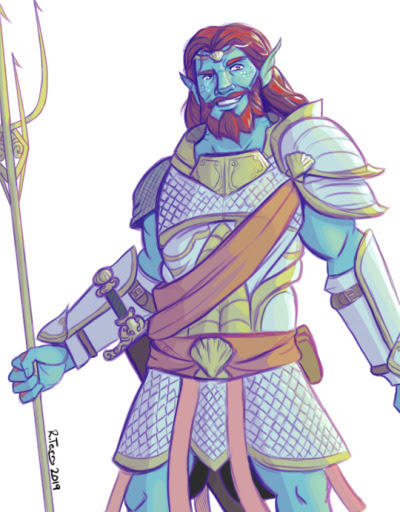 Aros hails from the regional Triton hold of Telmaridea, which is charged with keeping watch for the extraplanar sea monsters of yore in the principalities surrounding Redwatch. As an initiate in the Telmaridean rangers, Aros was a diamond in the rough; he was quite good at hitting things, but not as good at being a team player. In order to hone his “people skills”, Aros was selected to serve a tour ranging among the principalities of the Fair Strait. His official duty on Redwatch is to support the Triton community (particularly its supply chain) and to protect its interests in the island’s burgeoning mining trade. Aros is a Paladin of Persana, the Triton god of Justice. Part of his charge is to spread the faith to the people of Redwatch – so they know just how lucky they are to have Persana’s favor (and so that they pay tribute). Aros is not thrilled by his post, but vows to do his best to impress his superiors so that he can return to Telmaridea as soon as possible for a more coveted role ranging the seas in search of the Triton’s ancient enemies.