action-adventure, adventure drama, D&D, Dungeons and Dragons, how to

Welcome to another “how to homebrew…” episode, and you’re desperate because your Dungeons and Dragons (Or Pathfinders) Group wants to go 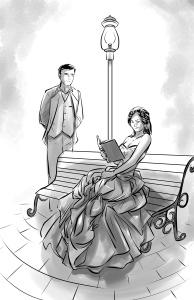 Didn’t we just meet last week? Yes, and that’s why I’m ignoring you.

back to where they just were, because they missed some key piece of information. Or perhaps only part of the group has been there, and the rest wants to explore it as well. Never fear, here are three easy steps to help you out (GUARANTEED*************).

Recently I ran my Expanded Wyvern Tor Beginner mission for my D&D beginner group (We’re all beginners). But I had already run it with two of the same players the weekend before, and had to make some last second adjustments. While this was one of three places they could have gone, they returned to the Temple of Zumash (Wyvern Tor) based on the NPCs and missions they had already gathered. So what’s a Dungeon Master to do when your PCs want to go back to the same place? Here’s three easy things to do!

First: Remember what happened last time, and leave evidence of it. In the first go through, the PCs had killed the necromancer and burned his tent. They’d also destroyed / damaged several traps and killed several enemies in the adventure. So as they approached again, they saw the burned remnants of the tent, and the decomposing body of the necromancer. They encountered scattered bones from the skeletons they’d destroyed, and obviously triggered traps from earlier. The two major NPCs/enemies in Wyvern Tor that they had already encountered greeted them and referred to their previous visit, and the limitations placed upon them then were still in force. Also remember that caves and tunnels don’t remain empty for long, other things will move into the area as it is a good shelter, so add in some other enemies in different places. The hardest job here is to remember what the PCs did – you can easily use them to help by asking them to retell their previous adventure to their new companions. It builds roleplaying abilities and helps reveal what they remember. You can adjust the dungeon events accordingly.

Second: Have a backup NPC or Hook ready to go. This is where multiple hooks really come in handy, as the PCs may have entered the cave for one reason before, then realize they hadn’t fully taken advantage of all the options and returned. In my case, with two of the NPCs missions no longer available (one successfully completed, one killed by the PCs), I leaned heavily on the third, who used it as a ‘dangle’ to get them to clear Wyvern Tor and receive help in finding the Lost Mines of Phandelver. To add an additional hook, I used one of the optional mission I’d thought of earlier, and provided a (hidden) link to various discussions and situations from earlier – in this case, the injured leader of an Orc Warband asked them for help in finding his missing son inside Wyvern Tor, only they don’t know who he is. The party didn’t even ask for his name, they simply agreed to help and entered.

Third: Use collapses, cave ins, and other blockages to force new paths and new exploration. In the first run through of Wyvern Tor, the PCs only explored four of the rooms and a tunnel. Blocking that tunnel forced the PCs into new territory and encouraged them to explore. Another random event locking out another doorway later, and the PCs were forced to explore the whole dungeon. Railroading, perhaps, but also very rewarding, especially as the PCs were able to reunite Agatha with her long-lost ghostly daughter, thus clearing the entire dungeon. This ‘unlocking’ of different accomplishments rewards both completionists and those PCs who enjoy revisiting old locales, as well as encouraging players to explore. Finally, be sure to change the ending situation to create the unexpected. When the PCs rescued the Chieftain’s lost son, they were surprised to find an entire warband outside Wyvern Tor awaiting them. This allows another roleplaying opportunity and gives the PCs a challenge they cannot face via violence, only through goodwill.

What do you think? How do you change your adventures when you have PCs going through them again?

Be sure to subscribe to the blog to get more D&D Adventure Writing, Tallavanor’s Tales and other writing, life, and nonsense related things!