Wyvern Tor is now available via Fantasy Grounds for virtual tabletop play! Check it out now!


Happy Thursday, and Happy Beginning of Summer day to all my teacher friends!

Wyvern Tor Revisited is now out and available for Virtual Tabletop through Fantasy Grounds. A great option for expanding the beginner campaign through the Lost Mines of Phandelver, or even expanding the Essentials kit adventure of Dragon of Icespire Keep.

If you missed the background behind this D&D module, here’s some insight!

So, you’re here to inquire about the strange circumstances up at Wyvern Tor? Better you than me going up there, I tell you! Some people say that it’s the lost soul of a mournful farmer, intent on murdering those who killed her husband. Others say it’s a long lost priestess of some crazed god, looking to resurrect him. But between you and me, I think it’s one of those damned necromancers, out meddling with the dead and bringing back things that should stay six feet under. Fortunate you came along to deal with it, eh?

This module revisits Wyvern Tor, combining the original mission from the Lost Mines of Phandelver with several other small side mission to turn it into a fully fledged story. Contained within are a summary of three new sets of hooks from different characters, two new magic items, a brief summary of the temple and the god it was built to worship, along with a room by room account of the temple insides. Five maps, two for the DM, two for the PCs and one PC prop, are included, with one version of each being setting neutral, for use in all your adventures!

VTT Kohtumine published! Check it out!


Greetings everyone! I’m excited to share the news that a second of my D&D modules is now available on Fantasy Grounds via DMs Guild thanks to Grim Press.

Grim Press is a group of gamers and dungeon masters who work tirelessly to bring ever more exciting and engaging products to life on your tabletop! Through collaboration with them, they have already started converting some of my products over to Virtual Table Top. You’ve already seen the port of the Temple of the Thunder Bringers that I shared last week. Now check out the Kohtumine’s Virtual Table Top version!

I encourage you to check them out on their sites below, and go and check out more of my products as well!

Like what you’ve read? Subscribe to get more great insight into my next projects! Check out my novels and other D&D modules as well by looking at the pull down menus above. Thanks for checking it out. Remember to leave reviews to encourage others to read and explore my work!

Greetings, and welcome to a sneak peek of my upcoming D&D Adventure Setting Module – A Field Guide to Temerrit. Let’s take a look at Cobalt Landing, one of the three largest cities in the setting and a hint of what you’ll get what you purchase this module.

END_OF_DOCUMENT_TOKEN_TO_BE_REPLACED 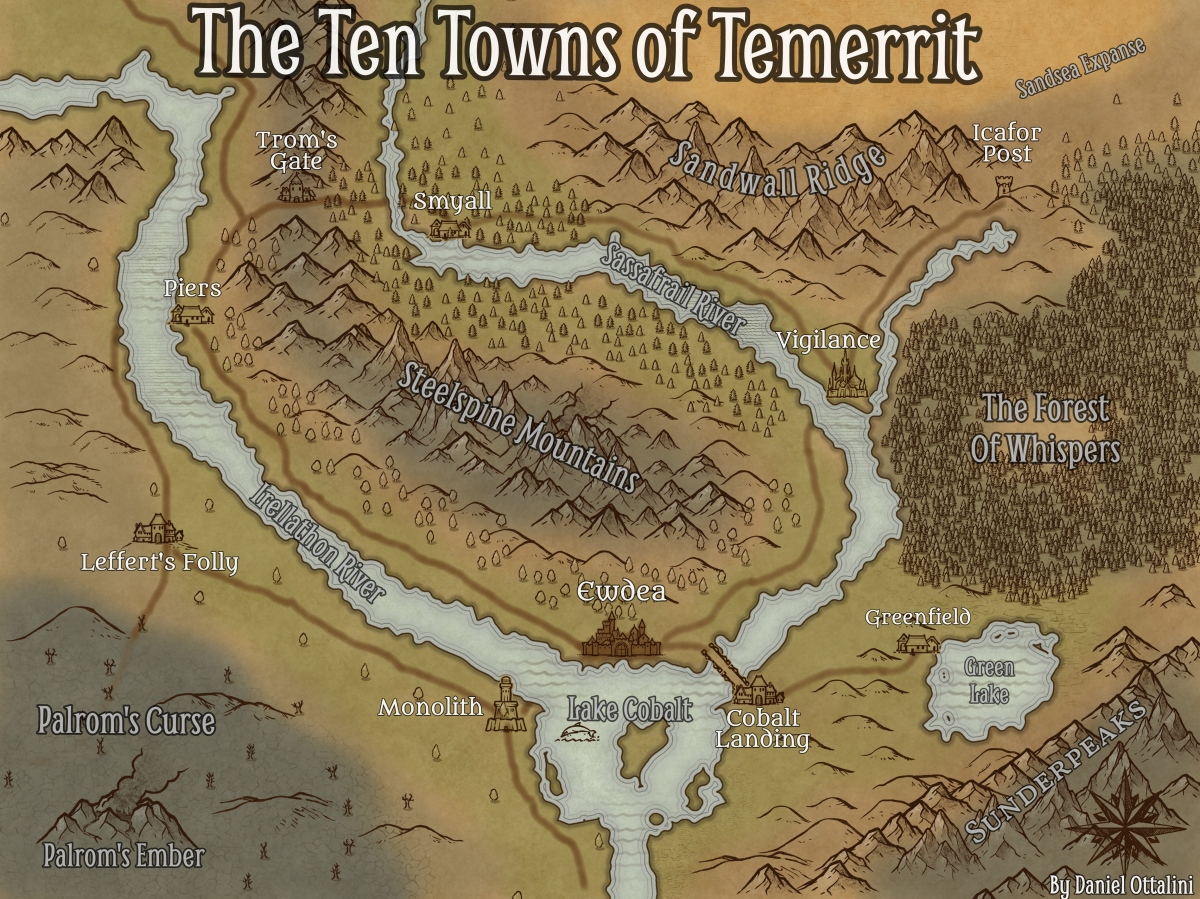 Hot on the heels of my last adventure module – Kohtumine: The Great Gathering of Ships – comes a setting module with a distinctly less nautical flair and a focus on the interplay between towns and villages in the region called Temerrit. The Field Guide to Temerrit adventure setting will provide ten distinctly different town maps – from small caravan style gatherings to desert outposts to a massive capital city. Each of these can be used as is, or as a stand in to represent a new location of your choosing!

END_OF_DOCUMENT_TOKEN_TO_BE_REPLACED

Get my latest Dungeons and Dragons Module – Kohtumine, the Great Gathering of Ships – now on DMs Guild!


Kohtumine: The Great Gathering of Ships, is now live and ready for your enjoyment! Get my 5th edition friendly high-seas adventure module on DMs Guild now for only $9.95. Missed all my earlier posts? Check them out and learn more about this awesome adventure setting, perfect for any levels!!

The Kohtumine (Cou-tu-mine) is a great gathering of ships in the middle of the ocean during the week before and after the summer solstice. Imagine a thousand ships, all tied together, forming a floating city as far as the eye can see. Their masts touch the sky and the hubbub of commerce echoes beneath the waves. The Kohumine is a once-in-a- decade occurrence, famed throughout the seas and oceans. It heralds the changing of the trade routes, the tides of power, and the crowning of a new Lord or Lady of the Oceans.

In this world-neutral adventure setting module, you’ll find a brief history of the Kohtumine, the major factions that seek to gain power during the two week gathering, seven map inspirations for encounters, a random event table, a dozen new NPCs, downtime activities, ship stats and upgrades, plus sample mission hooks for parties 1-5, 6-10, 11-15, and 16-20, as well as ideas for how to adapt the Kohtumine to your setting!

Check out the latest teaser for the Kohtumine! Its a brand new ship type – the Sloop – with stats!


Welcome back to another look at the Kohtumine! I’m nearing completion, and based on feedback, this adventure setting looks to be nearly 50 pages in length! Hefty! Today I want to share one of the pages of the Kohtumine, a sneak peek at a new category of ship for your enjoyment, the Sloop! Smaller than the ‘regular’ sailing ship, but larger than a keelboat, this heavily upgraded Sloop is the Azure Vestige.

END_OF_DOCUMENT_TOKEN_TO_BE_REPLACED


So now that you’ve had a tour of the Kohtumine, just who all is coming? From the deadly and piratical Black Swarm to the noble and cunning Varquetians, find out more inside!

END_OF_DOCUMENT_TOKEN_TO_BE_REPLACED


You’re going to have to speak up! I can’t hear very well in that ear. That’s what happens when you face down pirates in the Gulf of Hertanzia and…oh, you’re not here for stories. You’re here for the goods. You want weapons? We’ve got them. You want every type of rope imaginable? We don’t have that, but the people across the way do! Exotic metals, gemstones, jewelry, if it isn’t here, then you’ll have to go to the Silks. But no one wants to go there, you come out smelling like a flowerpatch. Unless, of course, you’re looking for perfume, in which case check my cousin’s ship three rows down.

END_OF_DOCUMENT_TOKEN_TO_BE_REPLACED


Silk? I have silk. Every color of the rainbow. Stripes? Yes, of course, whatever you prefer. Solid colors are my favorite as well, and that green is a particularly bright and…uh…charming, that’s the word. As you know, we only procure our products from the most organic plantations in the west. The color you’ve chosen comes from a dye made by the illusive Tumril Lion Beetle. Thousands of them are crushed up to get that color. You want a discount? How much are you willing to buy? Free pillow with every 200 feet of material!

END_OF_DOCUMENT_TOKEN_TO_BE_REPLACED

Is your ship in need of repair? Head to the Nails, the best, and only, repair cluster in the Kohtumine (and on the high seas). We can fix anything, as long as you have the coin!


Now Cap’n, you don’t want to be anchoring in the Nails. We’re trim fixed up and as seaworthy as possible. We’ll get no rest there, sir, and believe me when I say the headaches will stay for months. That is, if we wake up and still have the boat around us, instead of being scrapped for parts while we sleep. And don’t be eyeing those magical catapults either. They’ll quote you two thousand, and mean two thousand platinum, not gold. Damned tinkerers.