Got a complicated novel to plan? Or perhaps you want to help your Players keep track of all the people they’ve met and who they’re connected to? Well, put away the journal (for this reason at least) and use Kumu instead!

Kumu is, quite simply, a mapping system. It is used by organizations and businesses to map relationships between people, organizations, programs, and systems. It is flexible, allowing for users to determine which category they want to organize things into, and how to label different things.

On the recommendation of another TTRPG website (which I’m blanking on right now, eek!) I checked into Kumu. I was looking for something that would help keep track of the different NPCs my PCs are encountering in Saltmarsh. One of the biggest out-of-dungeon draws of Saltmarsh is the interaction and conflict between the Loyalists and Traditionalists. I’m using Kumu to help the PCs keep track of who is supporting who. One of the things I like about this is that I can make connections between people, but I can add them later. So if the PCs discover so-and-so is the lover of another person, they can add that connection.

The free version allows you to create public projects. A paid version allows private ones. One of the biggest differences is that if you want to add other people to a free version, they automatically become collaborators, which means they can mess with your pretty structures. That may or may not be okay to you (especially if you want them to take it over, which is a good thing) but if you’d rather be the only one in charge, don’t name collaborators and just show them pictures of it or give them the link to see.

At first I got really annoyed when I realized that tagging people with too many labels leads to a discoball effect. After some trial and error, I realized the better way to set it up is to create Organization objects and link them to the NPCs that are connected to them. This way, you can use the Pin function to lock down certain things and not let them jumble about all the time. Here’s a slightly closer view. You can see that the Saltmarsh Town Council has five people linked to it – these are all members of the council. Some are also linked to the ‘loyalist’ organization, others are linked to the traditionalist, or to other NPCs.

This would also work really well for any type of murder mystery / investigatory TTRPG campaign. You can zoom in and out, and add things as it goes along. You can label the types of connections, and even write details for each connection so you know what is happening. For example, in mine, I have the “works with” connection and the “married to” connection. As things go on, I may even have a “Rival of” connection. 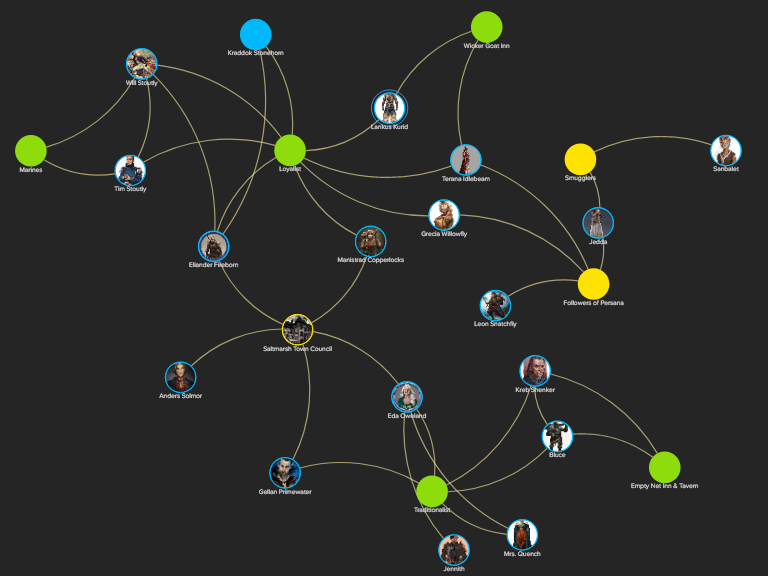 So there you have it! A cool tool I look forward to using in the future. My rules for using this (as a DM) are…

In a novel, it’s a big easier, as you’d want to put all the connections down early. But it also is useful over a series of novels, because let’s be honest: No one remembers if Julius talked to Alexandros in the first book when you’re in book 3. Do they know each other? Are you sure? This way, you can establish connections and label them to say what happened and how.

So there you have it! A cool use of a tool for big business that can be used for D&D. Pretty awesome! Any other fun tools you guys use for character mapping or story design? Let me know!

(FYI, not paid by Kumu to do this at all, just someone being excited at a new tool)