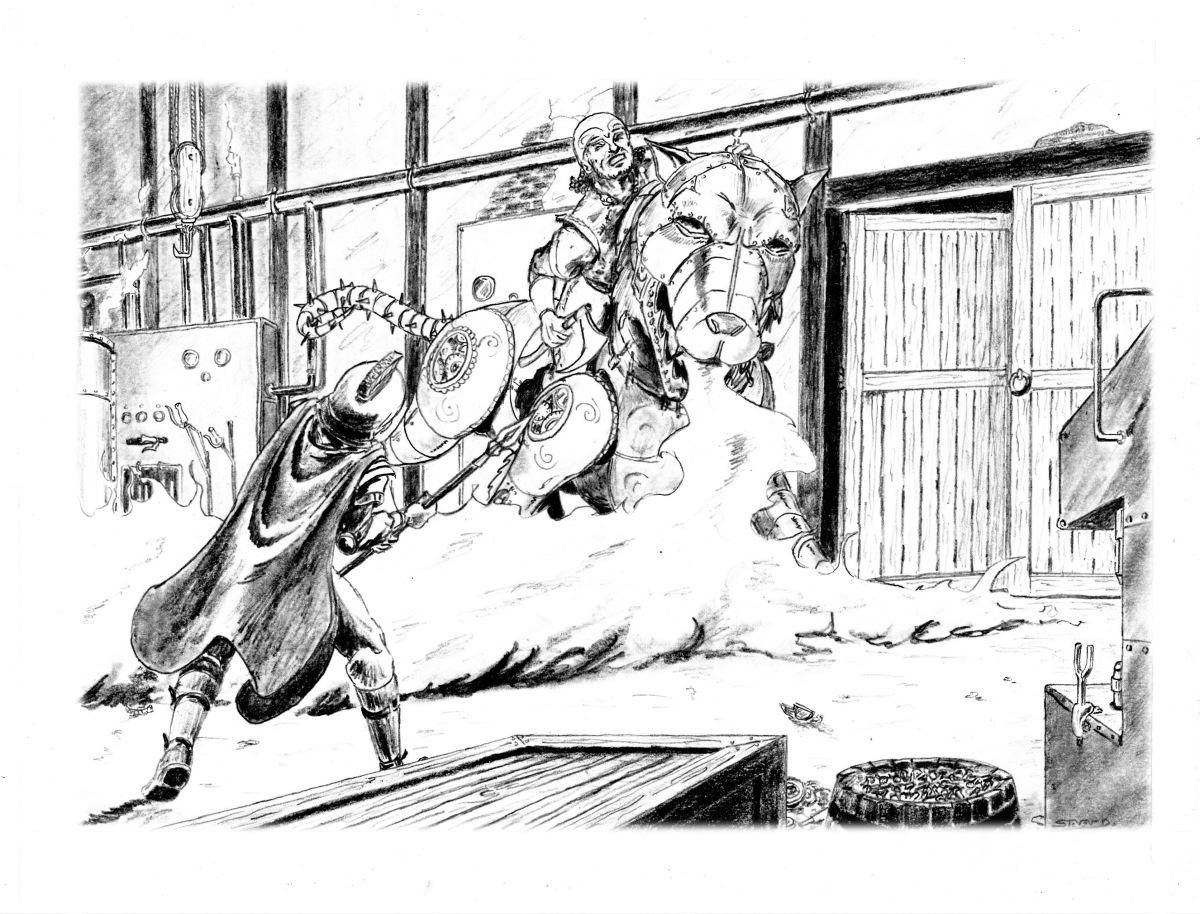 What exactly is a mechagladiator? Only the most technological advancement in the arena in the 1800s! One of my most favorite steampunk elements in my novels, Mechagladiators are impressive and awesome to see in battle.

In my first novel – Brass Legionnaire – I introduced a new concept – a mechagladiator. A one-man piloted bipedial machine. Powered by a Volta Model-III engine fueled by liquefied coal gas, and relying on steam-driven pistons, it is a machine that is capable of fighting for about fifteen minutes at maximum capacity before running out of fuel.

With the costs of training and retaining human gladiators becoming astronomical with the abolition of slavery in the late 1790s, many of the major gladiator ludi, or houses, began to shut down as it became harder and harder to find men and women willing to fight to the death for pay, rather than as slaves. Thus, the various powers with interest in the coliseum and arena had to find other sources.

Alessandro Volta Dacia is noted as one of the foremost inventors of the Mechagladiator, although there were many other innovators behind the scenes. The events in the Last Gladiator detail the first conflict between human and machine, but it was not to be the last. Eventually, mechagladiators replaced humans entirely in the arena, although it was not unheard of for human gladiators to remain in the ring for years after, especially in the exterior provinces and the Caesarian Colonies.

Mechagladiators were originally requested by the legions to serve as quick scout vehicles, but that role was quickly superseded by ostrichines, which had a much faster movement rate, and had more economical fuel consumption. Ostrichines could go days without refueling, even at full speed, while Mechagladiators required far more supplies.

The possibility of using them as a shock assault role was replaced by the mechaniphant, which was far more stable and also could transport both men and material. Thus, the mechagladiator was only useful to the legions in a secondary roll. Too fuel needy to serve on campaign, and too limited in scope to patrol borders. A few were requested for use as counter assault troops and placed at specific border forts along the Khanates of the North, but otherwise, the military applications were limited.

Even Nortland investigated creating their own version of mechagladiators, but evidence from Roman punitive expeditions reveals these attempts were quickly abandoned in the face of difficult terrain and harsh weather conditions. However, the Nortlanders adapted the ostrichine engine to create their own mechanical scouts – the mechawolf. By up-sizing the engine, they created something that fulfills the role of heavy scout, rather than the lightweight speedster that is the ostrichine.

Thus, the mechagladiator found a niche in the arena, but who knows what the future will hold? When the matter of fuel consumption is dealt with, Rome will have yet another impressive machine to support its legions.

Be sure to subscribe to the blog to get more Steampunk creations, write ups, author tips and more!