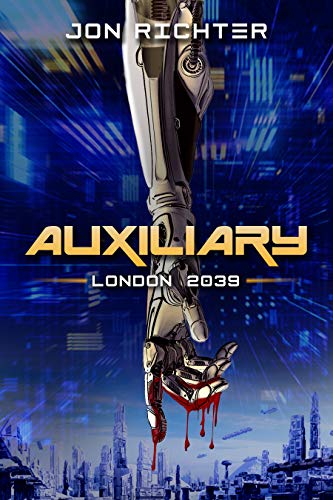 In Short: Auxiliary: London 2039 is a fast paced murder mystery thriller that hammers home the challenges of our changing world and how technology can both help and hurt society. Fans of Black Mirror or other cyberpunk media will love this novel. Relevant and timely, it definitely makes the reader wonder “what if…”

Set in 2039 in a London not so far removed from reality that it isn’t recognizable, Auxiliary: London 2039 follows the tale of Detective Carl Dremmler as he solves a murder that only gets more complicated with time.

When police detective Carl Dremmler investigates a murder, the prime suspect claims the AI controlling his robotic arm perpetrated the crime. As Dremmler discovers clues that the suspect might be right, he’s forced to stare into the blank soul of the machine as he desperately searches for the truth.

This event sends Dremmler on a winding exploration through both lofty heights and seedy underbelly of a darkly futuristic London. At times, the amount of graphic sexual action – even with robots – was a bit too much for me, especially early on. It does, however, tie into what we already know – that technology used for one purpose can always be used for darker, or perhaps more ethically grey, uses.

The tempo of the book is relatively fast paced, with only a handful of sections where you feel the book really slowing down. The conflict between Dremmler’s inner demons and outside challenges made me wonder, at points, if Dremmler never ate and only drank beer. But I think those demons are part of what makes the story, as the detective slowly comes to several key understandings about The Imagination Machine (TIM) the ever present, hyper aware computer that controls everything in London and beyond.

In exploring the characters in the story, I was a bit disappointed in the lack of racial diversity – almost every character is either an older white male, young white female, or young Asian female. I did like how the author included others on the gender spectrum, so-called ‘neuts’ and used pronouns such as ‘ver’ and ‘vere’ (which confused me at first, so much that I thought there were typos) but the references quickly became part of the writing and I liked having different gender types represented. I still question how much more diversity could have been present in a future London, (beyond the DCI who we only see for a brief moment) a city that is currently already very diverse.

I won’t lie, this book is outside my normal comfort zone. I mentioned earlier that fans of Black Mirror would love this, and that certainly isn’t my normal go-to entertainment. But it got me talking to my fiance about the situation and the world that Richter built, and it made me think critically about my own connection with technology inside an outside the home. With the Coronavirus making distance learning and remote working into a requirement, not a luxury, I can’t help but wonder. How long before someone builds a supercomputer that runs everything? What happens when we find out we’re replaceable? That’s the key motivator in this story, and Richter wrote Auxiliary: London 2039 creepily, drearily, engagingly well.

Definitely not recommended for under 18 years of age due to violence/police actions, sexual actions, and language.

You can find Richter’s Novel on Amazon or on Barnes and Noble.