It is with great happiness that I announce the publishing of the createspace paperback version of Brass Legionnaire. You can find it here before it has a permanent place on amazon.

Or, if you’d prefer to enter a giveaway for the book, I’m giving away three copies on the website here or if you are a member of Goodreads, you can click on the link below.

See the giveaway details
at Goodreads.

As you can see, the giveaways end soon! And, if you are a smart and crafty person, you can enter to win in both places! One just requires a comment (the website) and the other simply requires you to be a member of Goodreads! If you sign up for both, and somehow win both, I’ll send you just one copy and redraw for someone else (it’s only fair after all!)

I have the actual books here. They are ‘proof’ novels, but they are exactly the same as the real ones! Hope you are excited! Sign up soon, the contest ends in three days!

So I went to see the move John Carter yesterday. We shelled out the extra money to see it in IMAX, not because we really wanted to see it in IMAX, but because our local movie theater doesn’t like to show movies starting around 9 pm (It likes 8pm and 11 pm, but little in between) After being deafened and blinded in the previews, we were treated to a real spectacle of a movie. But I digress, this post isn’t a movie review, but rather how I saw a ton of amazing ideas that I COULD use in my novel, but will most likely choose not to.

The most challenging thing about a steampunk world is that you have to remain true to your specific subgenre. For example, Boneshaker (Sci Fi Essential Books)

includes undead, guns, airships, etc. But it stays true to roots without using ray guys, rocketpacks, or technology that is beyond what the locals *could* realistically have designed.

When I saw John Carter, the thing that stood out to me the most was this… 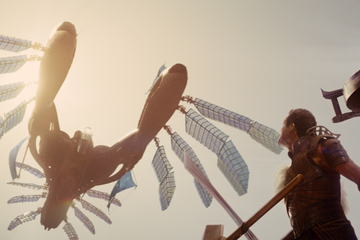 Yes, one of the coolest designed airships I’ve ever seen. And I would have loved to somehow make mine (in Brass Legionnaire) as cool as those. But I won’t for a few reasons.

1.) Believability – My Romans are still running around using steam power. Those are definitely not running off steam power.

2.) I don’t want to copy someone else’s idea. Could I take a few pointers from how they look and add descriptions to my story? Sure, but I don’t want to just blatantly take an idea and throw it into my story because it’s cool. That’s a bit too crude for me. Ideas and a story have to match.

3.) It would take my story in an entirely different direction than where I want it to go. I want my books to show technological process and advancement book by book. I don’t want it to be a ‘oh, look, in the last two months we developed this awesome airship that doesn’t rely on hydrogen, helium, or steam power and it works perfectly. By the way, we armed it with these artillery pieces.’

I guess the point of this post is simply to make sure that your technology matches your story. I’m not saying you can’t – or shouldn’t! – be outlandish, but I’m one of those people who get’s thrown out of the story when the main character pulls out a weapon that doesn’t match the rest of the world or story and just pulverizes the enemy.

It’s like the green skinned aliens in John carter who run around with spears, swords, and projectile guns, but aren’t lugging around the alien equivalent of the RPG – they aren’t up to that yet. If your steampunk story has guns, then give them guns, but they shouldn’t have an M16 while everyone else has a muzzle-loading rifle. Technological progress doesn’t move in that way. If one country or place has it, soon enough everyone else will beg/borrow/steal/take by force that technology.

A good book to read is Guns, Germs, and Steel: The Fates of Human Societies

Great read on a topic of technology among cultures.

PS – book editing is halfway done, hopefully it will be ready to go by May!

So in case you didn’t know, I’ve been using the company Streetlight Graphics for my book’s cover art. I decided to splurge on their Ultimate Pro Package, which includes the following (Those people new to self-publishing may find this really cool!)

A written tutorial explaining how to upload your e-book

(It also used to include banner ads for wherever you wanted them, but they claimed that most people didn’t want them. I asked nicely and got them included 🙂 )

To me, this was an awesome deal. I mean, I know I could spend some of my own time formatting them for all the different sites, or just pay someone $50 to do it, but the fact that I get a print cover, an e-book cover, and someone to do my formatting all at the same time is really cool. Also, its the convenience factor. It’s only one person to talk to, handle, and work with, instead of several different ones. Although I’m pretty technologically savvy, I’ll take all the help I can get on this first go around.

How did I find them, you ask? Actually, it was courtesy of Lindsey Buroker, (Encrypted

) someone who I admire and have been following for the last few months. She puts out great comments, tips, tricks, and really useful stuff for us self-publishing people out there. She used these guys earlier to update her cover art for her novels. I have to say my experience with them has been awesome. No complaints at all! They are very communicative, open and helpful. They are able to change the smallest things to fit your wishes.  They knew how to deliver what I hadn’t even known I had wanted (If that makes sense?).
Anyways, on to the actual point of this post. I asked for and got two different advertisements that I can use on my YouTube page (not much there now, much more planned in the future). In addition, I’ll see if I can somehow adapt it for my twitter (@dOttalini – Add me!) I figure that I can use these cool advertisements to point people watching my videos or tweets in the direction of my book once it is published. So here, I’ll post them below.

This one is a 728 x 90, which is a perfect size for a youtube video. They can be made on photoshop if you’ve got the time and desire (I’ve done it before, even though I’m a poor hand at it!)

The second one is simply 468 x 90. It’s a bit smaller and may be a pop-up ad in a video, rather than the header of a video or posting. Let me know what you think of them. Like I said earlier, It’s important to keep the theme simple, but also demonstrate the concept of your book.

I’ll take this last moment to plug my kickstarter project. PLEASE consider donating any amount of money, there are some pretty cool rewards  you can earn (For those of you with lots of disposable income, You can not only name a character, but decide if, and how, you want them to die!) Here’s the link again, talk to you all soon! http://www.kickstarter.com/projects/187272667/brass-legionnaire

Hey all, so my story is roughly halfway done, got over 33 thousand words. I’m anticipating completion by the end of September, with a few months then for editing, revising, and cover art. Just for a few sneak peeks at the ideas inside the story.

Julius is just looking for adventure and a paycheck.

Constantine is looking to move out from under the thumb of his controlling father.

Corbus is one of the most dangerous assassins, and he happens to work for the wrong side.

When a series of unconnected events brings one of Imperial Rome’s grandest industrial cities to its knees, there is only one unit close enough to respond. Join the 13th of the XIII legion as they become the first aerial assault legion in Roman (and steampunk) history. Check out the first chapter in Daniel Ottalini’s new novel Brass Legionnaire today!