I attempt to write the background of a D&D Gunslinger. Lots of fun! 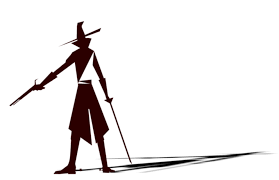 [Background: I’ve been invited to join a D&D 5th Edition campaign in a DM created world that essentially has the characters starting in a neutral-ish territory bordered by three empires. I’m posting this here because a.) I’d like feedback from the community and b.) any writing is good writing (for your soul) so I’ll post it. Also it means that I get another blog post out of this. If people are still interested, I can do mini-write ups of what happens once the campaign actually gets started. The world building & character connections are not mine, nor will I post the extensive write up our DM did, as it is his world and I don’t believe I have the right to share it (It’s also nearly 30 pages long, and that’s a lot of reading!) However, the backstory is mine, so I feel comfortable sharing it.

I’m also really interested in running this Gunslinger class. As I’m very new to D&D, I figure why not. Linked is the page for the actual Class from the D&D website. The comments were divisive, to say the least, but I honestly don’t care. I think it will be fun]

Origins: The Temere family has long been inhabitants of the north shore, and counted themselves amongst the handful of true ‘middle class’ families that could truly claim they ‘pulled themselves up’ after the decades of war and conflict. Gaul’s father discovered the abandoned printing press in one of the many small towns abandoned during the conflict. With the help of his young wife, they ‘liberated’ the press and traveled to Stravakul. After several attempts at securing business space, his found a small, open building in a recently rebuilt part of East Wharf. Business was (and still is) good enough to support a family, and with Gaul gradually taking over more and more of the day to day operations. He’s gained proficiency in both reading, writing, and mechanics, as the delicate fiddly parts of the printing press need consistent upkeep.

Which leads us to his newest obsession – firearms. After procuring a copy of a basic gun-making instructions at the request of the town mayor, Gaul made an exact copy for himself. An avid patriot of Strava, Gaul wants to see the only city in the Treaty lands make something of itself. A pipedream of a nation between two larger nations, forming a neutral barrier that played off the larger dreams of either side. But most importantly, a country where the common man has a chance, and their future isn’t controlled by the guilds, the nobility, and the rich. Gaul’s father never forgave the local town lords for abandoning their people during the troubles, leaving them to fight, and die, as the Betanin and Hobgoblins fought over the remnants of their town. He also never speaks their name. Gaul has begun to gather a group of friends who harbor similar feelings, with the beginning of a real proto-republican movement taking shape. The city watch hasn’t really cared very much, as the city is independent and the rabble haven’t done much yet. As both a printer and bookseller, and as his role in leading this new movement, several other denizens of the city have made their interests known.

First, Orbal, the second son of the lord mayor, has been seen around the neighborhood, perusing the pamphlets handed out by orphans and examining the grafitti left in alleys. Covert approaches by friendly allies make him seem to be open to hearing more, and he seems to sympathize with the plight of the lower classes, in private at least.

Second, Fernund, the brewmaster, has made it a point to offer up his services as both a brewmaster and as the owner of a conveniently secret place to host meetings. With the bookshop/printers shop being relatively small, and easily watched, Gaul has decided to host the weekly meetings elsewhere. Fernund’s brewery provides an excellent place, and other than paying for beer, is free.

Finally, Tristan, the half-elf theater owner, has begun to promote the causes of the lower class within her theater. As a writer, she does much of the work as well for the propaganda pamphlets. She and Gaul go way back, and was one of Gaul’s fathers first clients in the city when he delivered a printed series of scripts in record time. Since then, the print shop has become the number one print shop for all theaters within the city.

Gaul’s skills as a fighter are cursory, to say the least, but he knows his way around his tools, especially his wrench (blunt iron weapon). He’s average height but well muscled, definitely built for city living, but no stranger to the occasional missed meal, cold morning, or injury. Otherwise, Gaul has the skills of a merchant and mechanic, able to sweet talk purchases, smooth ruffled feathers, and fix some things, especially those relating to machinery found in a print shop (gears, winches, etc) – Steam engines really wouldn’t be his thing (at this time).

Gaul is also understandably slightly nervous about his role in the expanding “Committee of Cooperation” recognizing the need to both nurture the movement and keep his head down at the same time.

What do you think?