I’m happy to announce that we’ve crossed the 44k words border and are headed east! (or north, upwards, anyways.)

Today’s writing takes us to the far off lands of the Mongolian Empire, Stretching from the Sea of Japan and the Korean Peninsula to the fragile Mesopotamian border with the Roman Empire. Today’s writing finds Alexandros alive in the city of Ctesiphon, once grand capital of the Sassanid/Parthian Persian Empire, now provincial metropolis and western capital of the Mongol Empire.

Alexandros contented himself with staring about at the sights.

And what sights they were! Columns capped by twisting friezes and carved stonework abounded, temples to a dozen gods he thought he recognized and dozens more he hadn’t. A large river wound through the heart of the city, full of small, brightly colored boats that hauled goods and cargo from far off lands.

“It’s like Rome, only…hotter, drier, and sandier.” He whispered to himself. The guards used the butts of their polearms to shove recalcitrant or slow pedestrians out of their way. The people complained, but once they saw the small banner from the guard’s weapons, they hurriedly moved themselves. They reached an intersection at the top of a hill, and Ctesiphon spread out before him. With a start, Alexandros realized that his horse was not atop a hill, rather a long terraced platform upon which many other buildings were built. Craining his head around, he saw the city walls, large and imposing rising behind the terraced streets and encircling both halves of the city.

He pulled on the reins and his horse stopped. His host paused beside him.

“I must admit it, my lord. Ctesiphon is no Rome, but it is certainly comparable in its people and temples and roads.”

“It is funny, you know. That you call this city Ctesiphon. To us, it is Tīsfūn, as the locals said it when we captured it from the unworthy Sassanids. I have read your Roman histories and the Sassanid ones as well. You captured Tīsfūn no fewer that five times. And yet each time you gave it back. Do you know why this is?”

Alexandros frowned slightly. “I must admit I am no student of history. Other than the most recent variety.”

Tomorbaatar chuckled. “When you conquer a people you find yourself required to learn their history. So you can either embrace it… or erase it.” 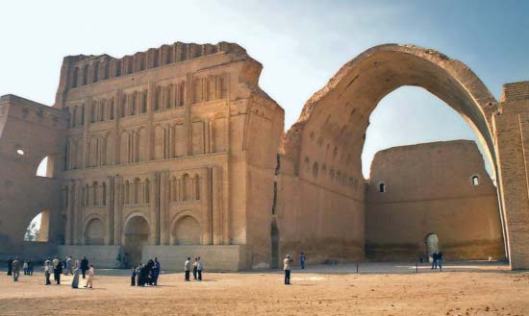 The Ṭāq Kisrā, Ctesiphon, Iraq.
(The White Palace)
jamesdale10
Used under the Creative Commons Liscence.
Let me know what you think!