So I’ve had a few requests from different readers asking for more information about the vehicles and contraptions in Brass Legionnaire. So enjoy reading about some of the lovely technology in my world.

Ostrichines – Ostrich-looking cavalry mounts that seat one cavalryman. Faster than a horse, but also louder. It’s generally used to support mechaniphants and escort infantry columns. They are also frequently employed as fast scouts.

Turtles – Think rolling turtle shell with a few heavy ballistas and you’ve got the idea.

Siege Caterpillar – Essentially just a covering to protect infantry from missiles, the purpose-built constructs are so massive they have to be constructed on train tracks to hold their weight. But once they are going, virtually nothing can stop them.

For Civilian use, you also have your standard fare – motortrolleys, steamtrains, cargo haulers – essentially large hollow bricks with wheels or legs, they are multipurpose and can fit any need imagined. 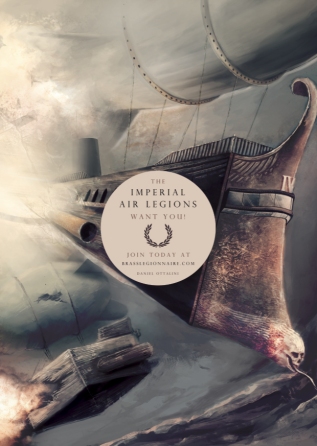 Military – The Romans were not huge fans of Poseidon/Neptune and the ocean – just remember the trouble they had knocking out the Carthaginian’s fleets in the Punic Wars! They essentially adapted the somewhat traditional trireme by modifying it with a large gasbag.

Older ships look more like ocean vessels with a gasbag strapped to the top. Newer vessels are of a similar design but the ‘ship’ part is now connected directly to the gasbag component, so the ‘gondola’ is in direct contact, rather than hanging like a hot air balloon.

There are civilian uses – generally mass passenger and cargo ones – and a few privately owned airships which are hand made to the owners specifications.

Skimmers – Lightweight flyers crewed by young teens. Unarmed except for a ‘stinger’ these are primarily scout and messenger units.
That’s all I’m going to give away today, folks.

BY THE WAY – BONUS OPTION FOR READERS –

If you’ve got an idea for a creation that you’d like to see make it into my next novel, Copper Centurion, let me know. I love hearing suggestions and am totally willing to incorporate reader ideas into the novel. I’ll even let you name it if I like it. Pop a comment below, or send me a message on twitter – @dottalini

Oh, and check out Brass Legionnaire if you haven’t already. It’s five-star reviewed on Amazon, and you get a great read. Perfect for these hot and hazy summer days.

1 thought on “Romanpunk Vehicles and Contraptions in Brass Legionnaire”